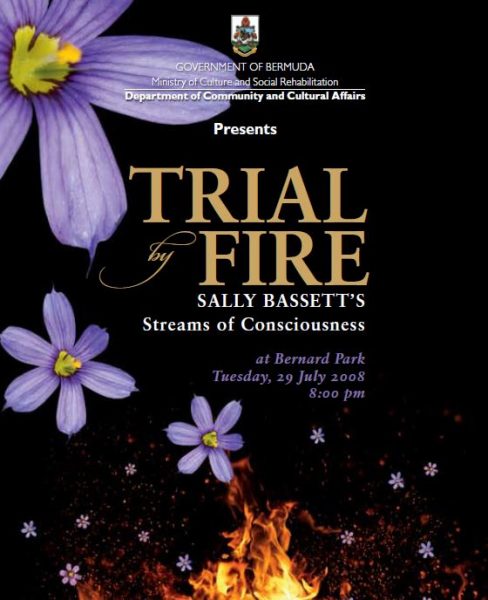 Sarah (Sally) Bassett was a mulatto woman who was owned by the estate of Mr. Dickinson of Southampton.  On June 1, 1730, she was tried on the “suspicion of poisoning severall persons” including the mariner Thomas Foster who owned her granddaughter Beck, his wife Mrs. Sarah Foster, and Nancy who was another household bondswoman.  It was said that Sally supplied Beck with the poison that Nancy later discovered in the wall of the kitchen outlet.  Although Sally denied that any sentence should be passed against her, stating that she “never deserved it”, she was later burned at the stake for the offence.  She was valued at one pound, four shillings and six pence at the time of her sentencing. Legend says that our national flower, the bermudiana, bloomed from her ashes.  Local lore suggests that it was extremely hot when Sally was conveyed to the place of execution; even now, some Bermudians refer to scorching afternoon heat as “a real Sally Bassett day”.

This is a work of historical fiction.  Although some of the facts which comprise this piece were drawn from the trial record as well as Dr. Clarence Maxwell’s research on the poison plot conspiracies, much of the material stems purely from the imagination of the author.  With these series of dramatic monologues, the author attempts to use the imagination as a way of filling the gaps in the historical record; and to explore the possible psychological motivations driving these characters that are based on historical figures.

The author would like to acknowledge the assistance of Dr. Clarence Maxwell and Ms. Leyoni Junos for their research and insight.