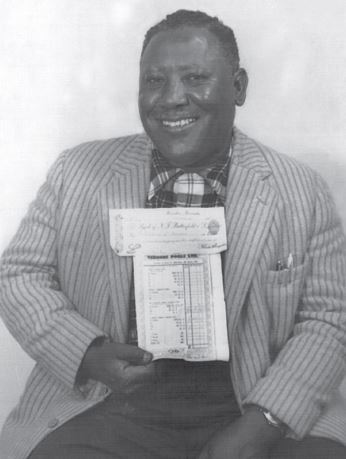 Herbert Simons was a larger-than-life entrepreneur with extensive business and family ties in Warwick. Born in Cedar Hill to Joseph and Lillian Simons, he began his working life as a mason and tailor.  He was introduced to the dry cleaning business while working as a laundry foreman.

In 1938, he established Deluxe Cleaners and Dyers on Cemetery Road, Pembroke with his brothers Earlington, Clarence and John. It was in operation for nearly 40 years. At its peak, it employed 30 workers and was the largest dry cleaning business in Bermuda.

His other successful ventures included Herby’s Steak House, Herby’s Golf Driving Range and the multi-purpose Warwick Stadium, which he built on four acres of reclaimed marshland which he acquired.

In the 1970s, he sold the property to Pembroke Hamilton Club. He served on the Warwick Parish Vestry and had a keen interest in politics. In February 1982, just eight months before his death, he was one of three Warwick community leaders honoured by Bright Temple AME Church.