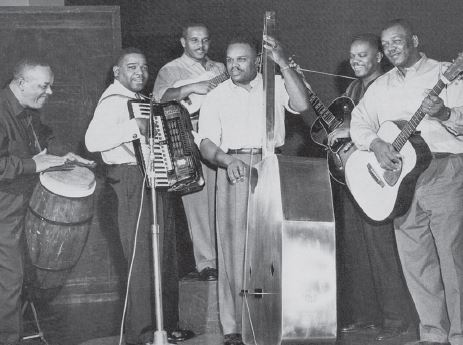 The Talbot Brothers were arguably the most famous of the bands that helped put Bermuda on the map during the golden era of tourism. Born in Tucker’s Town, they were among the families uprooted to Harris Bay during the 1920s to make way for the creation of an exclusive tourism enclave.

As tourism took hold during hold during the 1930s, brothers Archie, Austin, Roy, Ross “Blackie”, Bryan and cousin Cromwell “Mandy” Manders began performing at private parties in Tucker’s Town.  Engagement in hotels followed and by the 1940s, they were one of the Island’s top calypso bands.

They built on their popularity during the post-war years. Uniquely for a Bermuda act, they had a US manager, and toured the US during the off-season, performing at such upscale venues as the 21 Club and Waldorf Astoria in New York. They made two appearances on The Ed Sullivan Show and also secured a record deal with ABC Paramount Records.

They were known for their smooth harmonies and their instruments were guitars, harmonicas, an accordion, a 10-string ukulele known as the tiple, and the Bermudavarius or doghouse bass, that Roy made from a meat packing case and fishing line. The doghouse born the signatures of such illustrious fans as Babe Ruth, Frank Sinatra, Winston Churchill and Bing Crosby.

The Talbot Brothers, who became the Talbots when nephews Rodney and Ryan Tucker joined the group in the 1970s, continued to perform up to the 1980s.

Roy, the last surviving member of the Talbot Brothers, died in 2009 at the age of 94. His obit was carried in the New York Times—an indication of the group’s impact in Bermuda and overseas.