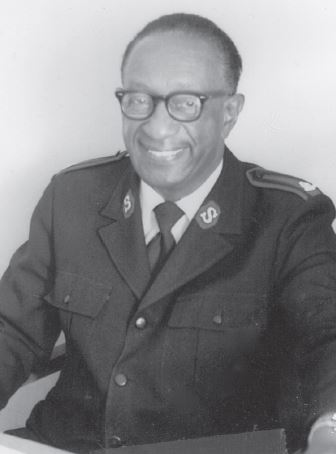 Major Albert Benjamin was one of the famed Dockyard apprentices—he qualified as an electrical engineer and also taught apprentices—but he made his mark as a Salvation Army officer. He joined the Salvation Army after marrying his second wife, the former Ruth Simons. They became officers following studies at William Booth Training College in Toronto.

He served as minister at three churches and rose up through the Salvation Army ranks to become Divisional Secretary. For 15 years, he and Ruth were in charge of Sarah Kempe Training School for Girls. They were also administrators of a foster home for more than 10 years.

A man of boundless energy, he devoted much of his life to helping young people, beginning from the age of 19 when he was president of Southampton Glebe PTA, despite being unmarried with no children.

He was twice honoured by the Queen and was the recipient of numerous awards, locally and internationally, including Rotary’s Club Paul Harris Fellow. Twice widowed, he was married to third wife, Yulisse, at the time of his death at age 90.