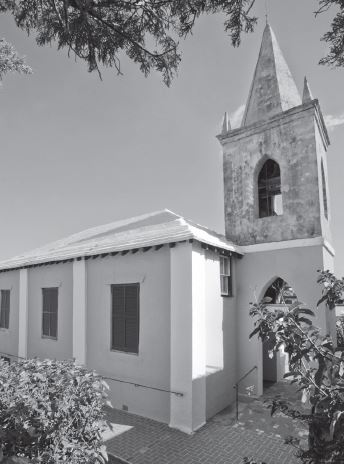 The building effort was led by Edward Fraser, a Barbadian enslaved man who came to Bermuda with his Bermudian owner Francis Lightbourn.

Construction began in 1825 on land donated by Chief Justice James Christie Esten. Church members quarried stone, transported the blocks on their backs, heads and shoulders to the site, and did the actual building, during their free time, usually at night, over a period of two years.

The church, located on what is now known as Moonlight Lane, Warwick, was dedicated on November 17, 1827. Fraser was granted his freedom in January 1828 and left Bermuda for Antigua the same year. He became a Methodist minister and spent the rest of his life serving congregations in the Caribbean.

Bermudian enslaved leaders among them Keturah Bean, Joseph DeShields, Lucas Landy, Benjamin Wilson, Daniel Wilson and Richard Conyers continued the work Fraser had begun. Thomas Smith, a young white Bermudian, also gave significant assistance. At the time of Emancipation in 1834, the church had 66 members and their numbers increased over time.

Cobb’s Hill Church is a lasting tribute to Fraser’s vision, the dedication of its builders and the legacy of the Methodist Church, whose early leaders were firm in their opposition to slavery.